There are two big differences between now and the last time there was a cease-fire between Israel and Hamas. Back in 2014, there were still some remnants of the Middle East peace process to fall back on. Now, there's barely any contacts between the two sides. Also different this time, violence on the streets of Israeli cities, with Jewish and Arab citizens fighting each other. This is what the Biden administration faces in its first big test in dealing with a decades-old conflict. Brett McGurk of the National Security Council is here to talk more about that. Welcome to the program.

BRETT MCGURK: Hi, Audie. Thanks for having me.

CORNISH: In the president's remarks yesterday about the cease-fire, he said this about his conversations with Israeli Prime Minister Benjamin Netanyahu.

PRESIDENT JOE BIDEN: I assured him of my full support to replenish Israel's Iron Dome system to ensure defenses and security in the future.

CORNISH: So we know the president has reaffirmed Israel's right to defend itself. Is he worried about the way Israel conducted itself in this last operation, given the death count?

CORNISH: I'm sorry. I meant the death count on the Gaza side.

MCGURK: Yeah, well, I'm just - but he mentioned the Iron Dome system and why that's important. I think the president's objective from the beginning was to end this war as soon as swiftly as possible. And to do that, we pursued a very patient behind the scenes - we called it quiet diplomacy, but it was incredibly intensive behind the scenes, including six conversations with Prime Minister Netanyahu. And to limit the suffering and the death count, we had to bring the war to an end. And the president determined that the best way to do that was not the standard playbook. The standard playbook would have been - we might have called for a cease-fire immediately. That would not have led to a cease-fire.

CORNISH: Right. Or in 2014, when Secretary Kerry went there right away. This time, you didn't do that.

MCGURK: Or we might have sent senior envoys to the region. Suddenly, we become the story. It imperils our diplomacy behind the scenes. So we took a very different approach. But with the focus being on the fact that, look, there is no question Israel was going to defend itself and go after Hamas's military capacity, given the rockets falling on Israeli cities. Our focus was trying to bring the war to an end as rapidly as possible. It ended in 11 days.

If you look at previous Israel-Hamas wars, 2005 went on for many months, five or six months, 2014, you mentioned, 51 days, 2,300 killed in that conflict. You know, look. One day is too many, but we pursued, again, this very patient - we called it a quiet diplomacy. It was incredibly intense behind the scenes with the Egyptians, the Israelis and others to try to bring the war to a close.

CORNISH: And I want to jump in here because I have a few more questions. We're hearing a lot from progressive Democrats, obviously, Congresswoman Rashida Tlaib, Alexandria Ocasio-Cortez. They want the U.S. to put a hold on arms sales to Israel. Here's how they're calling for that.

RASHIDA TLAIB: And, colleagues, Palestinians aren't going anywhere, no matter how much money you send to Israel's apartheid government.

ALEXANDRIA OCASIO-CORTEZ: This is our business because we are playing a role in it. And the United States must acknowledge its role in the injustice and human rights violations of Palestinians.

CORNISH: We know that Biden came face-to-face with Congresswoman Tlaib, but is there any sense that he would ever consider any kind of limits on U.S. military support?

MCGURK: I think our arms sales with Israel and everyone else will go through. We're kind of back to normal order in this administration. They go through reviews and go to Congress. I think we very much continue to support our military cooperation with Israel. But I will say this, and I think the president was very clear in the number of conversations with Prime Minister Netanyahu, we have to find an end point to this conflict. And that's what we did. I would just add one more very important point, given the comments on the Palestinian side, we inherited a situation here in which all contact with the Palestinians had been severed. All U.S. aid had been cut, stopped - security assistance, humanitarian assistance, our consulate closed, shuttered. We have been working from Day 1 to reestablish those connections, to reestablish our diplomatic networks.

CORNISH: But the administration doesn't have an envoy to the region. There's no U.S. ambassador to Israel, no confirmed assistant secretary of state for the Middle East.

MCGURK: Well, all of that is in train. I'm the Middle East coordinator at the White House. My deputy, Barbara Leaf, is the nominated assistant secretary to NEA (ph). I was just in the region a week ago, and our diplomacy has been quite active. COVID, I think, limited our face-to-face engagements. There's an ambassador in the queue for Israel. All of this is moving forward. We turned back on on April 7, very early in the administration, $237 million in assistance to the Palestinian Authority, the Palestinian people, including humanitarian aid, UNRRA for schools and students. So this is all coming back online. I do think you have to consider the inheritance and what we found on Day 1. And I just can't emphasize enough...

CORNISH: Just a short time left. Are people looking at a policy from this administration that is to tamp down and caretake or is there a further initiative coming down the line?

MCGURK: If there are opportunities toward diplomacy, can build bridges, we will seize those opportunities. I think the president spoke at the end of his remarks last night. We think there may be opportunities. We'll pursue them. I think Secretary Blinken's visit to the region next week will be a first step in that direction.

CORNISH: Brett McGurk is the National Security Council coordinator for the Middle East and North Africa. Thank you for your time.

MCGURK: Thanks so much for having me. Transcript provided by NPR, Copyright NPR.

Audie Cornish
Over two decades of journalism, Audie Cornish has become a recognized and trusted voice on the airwaves as co-host of NPR's flagship news program, All Things Considered.
See stories by Audie Cornish 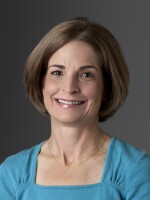