WHAT Environmental Film Series: Snowy Owl: Queen of the North 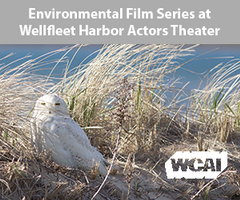 WCAI news director Steve Junker will moderate a discussion following the film, Snowy Owl: Queen of the North, which was featured on the PBS program Nature. The documentary provides an intimate view of these mystifying birds and the many challenges they must overcome to raise their young under harsh Arctic conditions. The film will be followed by a discussion with Mass Audubon’s Norm Smith, a Snowy Owl researcher since 1981, known for his work relocating and tagging “snowies” that occasionally turn up on the runways of Boston’s Logan Airport. Wellfleet Bay naturalist Joel Wagner will discuss where Snowy Owls can be found on the Cape in late winter and how to view them safely.