In This Place
Weekly Bird Report
The Weekly Bird Report with Mark Faherty can be heard every Wednesday morning at 8:45am and afternoon at 5:45pm. Mark has been the Science Coordinator at Mass Audubon’s Wellfleet Bay Wildlife Sanctuary since August 2007 and has led birding trips for Mass Audubon since 2002. He is past president of the Cape Cod Bird Club and current member of the Massachusetts Avian Records Committee.

Going on a Whale Watch? Keep an Eye out for Birds Too

In this time of tourists, the whale watch business is in full swing. Or at least half-swing - boat capacity is reduced and masks are required, but people are flocking to the boats, nonetheless. And with good reason – the Cape offers some of the world’s best whale watching, with our close proximity to the perennial whale feeding grounds of Stellwagen Bank.

Whether you’re a weekly renter or a local, in terms of wildlife viewing, it’s hard to match the experience of being feet away from a seemingly mythological leviathan like a Humpback Whale, perhaps in the company of calf, casually bubble feeding beside the boat. But there are some smaller residents of our offshore waters no less deserving of your attention, creatures that have come here from all corners of the globe to feed in our fish and zooplankton rich waters. Seabirds, mainly shearwaters, storm-petrels, terns, and gulls, are also worth watching along with the whales.

We have four shearwater species in this area, and it’s not unusual to see all of them on a whale watch. Learn their distinct flight style and you’ll be able to distinguish them from gulls at a great distance –moving in long glides interspersed with stiff-winged flaps, they hug the water, occasionally wheeling up and back if there’s wind. These ocean wanderers are brilliant at using wave-deflected wind to keep them aloft and propel them forward, thus saving valuable energy while they cover huge areas of the trackless ocean to find productive feeding grounds.

Unlike the vast majority of birds, shearwaters use their nose to get around and find food. Shearwaters and other so-called “tubenoses”, like petrels and albatrosses, have special bill structures to concentrate scent over their sensitive noses. They can detect the faintest whiff of chemicals associated with the feeding of zooplankton, leading them across miles of featureless ocean to areas where squid and small fish are concentrated. At Stellwagen, sometimes they just have to look for the humpbacks. If the whales are feeding at the surface, look for shearwaters and other seabirds feeding right in the mouths of the whales, snatching the small fish known as the sand lance out of the air as they try to escape the belly of the beast.

In most years, Great Shearwater is the most likely of the group to turn up on a whale watch. A distinct dark cap with a white neck and thin white rump tells them from the others. Sooty Shearwaters, being all chocolate brown with pale underwings, are easy, and can be found in most of the world’s oceans. Big, lumbering Cory’s Shearwaters, arriving here from the Mediterranean and Eastern Atlantic, prefer warm water, and are increasingly common. They are uniformly grey brown above from beak to rump, sporting a big yellow bill. At the other end of the spectrum, tiny Manx Shearwaters flap the quickest, appearing all blackish above and white below. This is the only member of the group that has nested in Massachusetts, if very rarely. Swallow-like Wilson’s Storm-Petrels, all from nesting islands deep in the South Atlantic, patter along the surface among the other birds, all dangling feet and fluttery wings.

For the seasickness-averse among you, the good news is that we are in one of the few places in the world where shearwaters and storm-petrels can routinely be seen from land, especially off the backside of the Cape from Provincetown to Chatham. A hike to Race Point in Provincetown can get you very close to the action, which often includes both seabirds and whales. But it’s hard to beat a day on the water, so call the whale boats and make a reservation. Tell them the bird guy sent you. They may pretend not to know what you’re talking about – that’s just a funny thing we do...

In This PlaceWeekly Bird Report 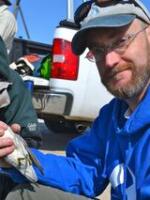