In This Place
The Local Food Report
00000177-ba84-d5f4-a5ff-bbfc9a9b0000 with Elspeth HayThe world of food is changing, fast. As we re-imagine our relationships to what we eat, Local Food Report creator Elspeth Hay takes us to the heart of the local food movement to talk with growers, harvesters, processors, cooks, policy makers and visionaries. Through these conversations she aims to rebuild our cultural store of culinary knowledge—and to reconnect us with the people, places, and ideas that feed us.The Local Food Report can be heard every Thursday morning at 8:45am and afternoon at 5:45pm, and Saturday morning at 9:35.An avid locavore, Elspeth Hay lives in Wellfleet and writes a blog about food, Diary of a Locavore. Elspeth is constantly exploring the Cape, Islands, and South Coast and all our farmer's markets to find out what's good, what's growing and what to do with it. You can find more of her work at her website, elspethhay.com. The Local Food Report is produced by Jay Allison and Viki Merrick of Atlantic Public Media.The Local Food Report is made possible by the support of the Local Food Chain.00000177-ba84-d5f4-a5ff-bbfc9a9b0001

Brent Hemeon has five acres in Harwich. And everywhere you look, there are apple trees.

I asked Brent for recommendations for apple trees for someone who'd like to start an orchard.

I love the name Fireside—they’re dessert apples, and it’s easy to imagine cozying up with one after dinner by the woodstove. Sun Golds are new, descended from the Golden Delicious, and quite tart. Brent says one thing to watch out for when you’re planting trees is how soon they’re predicted to bear fruit.

“I put in some trees years ago, and they were Northern Spies, and I said geez, when are these things ever going to produce? 12 years later. That’s how long it took, I was gonna cut em down, and then I read up on em, and saw oh, it takes 10-12 years, and now they’re doing well.”

Some trees bear in less than two years, others on average take six to ten. Northern Spies might take a long time fruit, but they’re cold-hardy, vigorous, and relatively large. Also, one tree catalog I found called their fruit “the best apples ever to grace a pie.” Brent says in addition to being excellent for cooking, Northern Spies are good keepers, and this is something he looks for in his apple varieties.

“Suncrisp and a Goldrush, will keep for extended period of time. I’ve got a walk in cooler down in the basement and I would have to say that they would probably last 4-6 months at least, maybe longer, but it’s nice to have an apple this time of the year and say wow, it’s still good!”

Suncrisps and Goldrushes are both yellow apples—and some people say they taste better after several weeks or even months of cold storage. It turns out apples don’t die when they’re harvested—they stop getting nutrients from the tree, but they keep respiring—breathing, like any living thing. And at temperatures just above freezing, they go into a sort of living hibernation that slowly converts some of their starches into sugars.

Brent says while he likes to experiment with apple varieties, not all of the customers that come to his farm stand feel the same.

He has apples in his orchard that people won’t try. It drives him crazy.

The Haralson for instance, is a beautiful big apple, it’s very good for dessert or a baked apple. He also has Mutzus, which is a green apple, which is really good for pies; it’s hard and very firm.

“It’s one of these things, you know you can tell people. Sometimes I’ll give em an apple, ‘Just try it,’ and they says, ‘Oh my god, that’s good!’”

The thing is most of us are only familiar with a handful of apple varieties. But two hundred years ago, there were more than 14,000 kinds of apples growing in the Northeast United States. That number dropped to less than a hundred in the mid 1900s, but in recent years has been steadily on the rise again. Today, there are at least 7500, maybe as many as 10,000 apple varieties. Brent Hemeon says however you eat them, he’s found every kind is worth a try.

“Apple crisp, apple sauce, just apples, like Granny Smith I like em with salt on em, cause they’re sour, sweetens em up a little. But I mean there’s all different varieties for this and that. I don’t know who could eat 10,000 different kinds of apples, (chuckles). Well, you know, give it a try.” 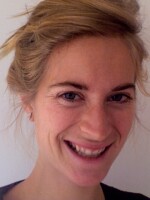 Elspeth Hay
An avid locavore, Elspeth lives in Wellfleet and writes a blog about food. Elspeth is constantly exploring the Cape, Islands, and South Coast and all our farmer's markets to find out what's good, what's growing and what to do with it. Her Local Food Report airs Thursdays at 8:30 on Morning Edition and 5:45pm on All Things Considered, as well as Saturday mornings at 9:30.
See stories by Elspeth Hay
Latest Stories