Join us Sunday Night for Arts and Ideas.

7pm “The Freed People” from Humankind. A documentary about how America responded to a massive refugee crisis after the civil war, when 4 million people were finally freed from slavery.

8pm “2 Years: Diaries of A Divided Nation” from KCRW. A peoples' history of the forty-firth presidency--reflections from around the country on Trump’s first two years in the White House.

9pm Shereen Marisol Meraji. Rob Rosenthal interviews the Code Switch co-host about non-narrated audio stories for an episode of "How Sound" and then we hear Shereen's non-narrated piece "A Strange And Bitter Crop.”

10pm Stories from all over the world on shuffle. It's PRX Remix.

It’s all on Arts and Ideas, Sunday night from 7 to 11pm. Right here on WCAI. Local Public radio for the Cape, Coast, and Islands. 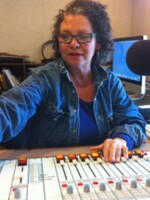 Viki Merrick
Viki produces WCAI's Arts and Ideas hosted by Jay Allison and is the Associate Director of Atlantic Public Media (APM), our production partners in Woods Hole. Together with Jay Allison and Atlantic Public Media she produces the Sonic ID's, the Local Food Report, One Species at a Time and essays for local and national broadcast.
See stories by Viki Merrick
Support for CAI is provided by
Support for CAI is provided by
The Forgetting
Listen to the Podcast
The COVID Remembrance Project