The Heat Check playlist is your source for new music from around the worlds of hip-hop and R&B with an emphasis on bubbling, undiscovered and under-the-radar acts. Who's got the hot hand? Who's on a run? It's a menagerie of notable songs curated by enthusiasts from around NPR Music.

This week's Heat Check selects come largely from iconoclasts who have already zeroed in on their individual aesthetics: a singsong rap soulman, an alté sensation, a noise-rap radical, a Memphis outlier and a bidirectional pop-rap multi-hyphenate. Elsewhere we get songs with signature sounds: drill merengue, rap regalia, synth-R&B as dance music, auto-tuned cyber-vibrato and more. Check in.

We're on the eve of cuffing season and yet Smino's "90 Proof" with J. Cole tries squeezing in a f**kboy fall before it's too late. The chorus is a tipsy plea to his lover performed in a half rap, half croon imbued with a vulnerability one can only express after a strong drink: "Not too great at relationships, at least I try / Patient, baby, gotta make a couple rounds / 'Fore I make it back to you to settle down." With production from Monte Booker and Groove — the latter having crafted a similar vibe on Isaiah Rashad's "Claymore," another cut in which Smi thinks he might have found the one — the beat has that playful soft knock he gravitates toward, one that's quite the temptation for a fall drive. J. Cole is a welcome mentor, playing the friend who's down to go out with you but constantly mentioning their partner at home the entire night. Fans have been waiting ages for Smi to lock down his album the same way his interest on "90 Proof" wants him to define the relationship, and here he makes his intention very clear: He's gonna come through. — Gabby Bulgarelli

Once you've enjoyed a breakout moment in music, there's really only one thing that can move you from "one-hit wonder" to confidently being co-signed as "next up": consistency. Nigeria's Ayra Starr is very much at the tipping point. Compared to her award-winning 2021 single, "Bloody Samaritan," which builds off the hunger of haunting strings and affirmations, Starr's latest, "Rush," rides a wave of mid-tempo triumph with a message of maintaining your blessings once you've received them. — Sidney Madden

The Philly rapper Ghais Guevara's appeal is summed up in the caption on his Bandcamp page: "im the reason your 14 year old won't shut up about Malcolm X." He's a militant progressive as likely to reference scholar bell hooks as the Terminator rebel Sarah Connor. "#FREEMIR," the opener from his latest project, There Will Be No Super​-​Slave, channels noise rap in pursuit of a sound that can't be ignored. With your attention, he makes his ideals plain: "You might've rallied to tell us to vote / But you never would throw you a stone / Talkin' bout peace when police got the dogs and the guns and the shields and the hose," he raps, before accepting the limits of his position, "Tongue of a poet but when has the words of a man ever threaten the throne?" — Sheldon Pearce

Here's how I imagine the making of "Poland" went:

LIL YACHTY: "You recording?"
ENGINEER: "Yep."
LIL YACHTY: "I TOOK THE WOOOOOOOOCK TO POLAND!"
F1LTHY: "What the hell was that??"
ENGINEER: "Do you wanna try that again?"
LIL YACHTY: "Nah trust me ... OK, now make me sound like I'm a robot singing into a fan."
RANDOM GUY IN STUDIO: "I'm leaking this."

Whether it's Michigan rap or sample drill, Yachty is constantly looking for new sounds to fold into his world. But the cyber-vibrato on "Poland" reminds me of the goofier Sailing Team days when he was emerging in the wake of Makonnen, KEY and other Atlanta rap mavericks — a singer that couldn't really sing but had enough charisma and auto-tune to pull it off. The song hinges on its insane hook. The verse is kind of forgettable. But that's all it has taken for fans to eat this thing up. Yachty is probably channeling Duwap Kaine, too, a 20-year-old from Savannah, Ga. who's quietly influenced a generation of internet rap crooners by pushing auto-tune to its limits. Kaine seemed to get the message; he's already released a remix. — Mano Sundaresan

If Ice Spice raised the flag for the Bronx with "Munch," fellow BX native Connie Diiamond is running with the torch on her latest, a remix to "Toot That." A wonderful fusion of drill and merengue, Connie slides over the beat, gassing herself and leaving men in the dust: "I'm vibey, none of you n****s excite me / I gave him the pum / Now I gotta zoom." The track samples Vitico's infectious 1999 merengue jam "Pum, Pum, Pum El Nene Bomba," an homage to Diiamond's heritage and upbringing. She reps her set throughout the song and video, with the help of fellow AfroLatino rapper MorenoITF. — Jerusalem Truth

Not to be confused with Megan Thee Stallion's Grammy-winning track, Gia Mayham's version of "Savage" is delivered with more of a snarl than a wink. Mayham (a.k.a. Rollie Pollie Snack Mealz) puts her foot on the gas with a sped-up sample of Webbie's "Give Me That" and fires off a barrage of warning shots at the "salt and pepper hoes" that aren't even worthy of her legacy. — Sidney Madden

Memphis is a beloved (and underrated) rap city, and while Lukah may feel like an outlier to its regional sounds, he has quietly been adding to its rich legacy. After giving crunk music a try, the rapper was drawn to a more matter-of-fact, bars-first approach. "Presence of Color," from his most recent album, Raw Extractions, is evidence of his evolution into an observer rapper and a philosophical thinker: on its first verse, which strings together various subjects of study (criminology, physiology, cosmology), he keeps expanding the scope through which he considers his surroundings. — Sheldon Pearce

ATELLER & Tan Brown, "Good For Me"

As New York-based duo ATELLER & Tan Brown work through one of their latest collabs, changing the rules of engagement rarely goes smoothly. Enveloped by synth claps and bass, Brown tries to decide if she should weather the storm of missed calls and mind games or just abandon ship: "I have a million reasons why I'd like to see what's left to find / Am I waiting for a recall 'cause I let you come back every time." Brown's ambivalence lingers with each note, and soon all reason fades away into the rhythm. — Sidney Madden

His viral song "556 (Green Tip)" might bounce around like an elvish jig, but iayze is really in his bag when he's rapping over dense layers of strings and synths, arranged throughout his latest EP, Final Fantasy: The Finale, by Massachusetts artist Devstacks. Full of enchanted rapping, complex buildups and jittery arpeggios, the music, dubbed "regalia," is like a classically trained musician's take on Chief Keef — or a Glo Gang disciple's attempt at writing a concerto. The closing track "Barbados" makes the simplest desires sound magnificent. — Mano Sundaresan

It's easy to hear the influence of one Nicki Minaj running through the music of TiaCorine, a Winston-Salem rapper balancing both punchy and graceful tendencies. She is seeking a similar duality to the Barb Queen, but her rapping is more dispassionate, with flows that seem to drag along beats, and in her gestures toward pop, her auto-tuned singing verges on ethereal. She is most captivating when forcing her way through noisy production, as she does on the ballistic cut "Rocket," from her new project, I Can't Wait. After a dazed hook, the song unloads into a barrage of rapid-fire bars. "Yeah, I got a glock but you know that I'm boxing," she raps. There's something almost lackadaisical about her delivery, even at her most aggressive, which makes it feel like she's making these songs casually for her own amusement. — Sheldon Pearce

Sidney Madden
Sidney Madden is a reporter and editor for NPR Music. As someone who always gravitated towards the artforms of music, prose and dance to communicate, Madden entered the world of music journalism as a means to authentically marry her passions and platform marginalized voices who do the same.
See stories by Sidney Madden
Sheldon Pearce
Gabby Bulgarelli 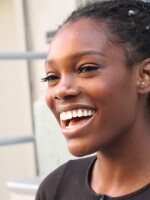 Jerusalem Truth
Jerusalem Truth is a storyteller, wordsmith, and multi-hyphenate artist. She is currently the Production Assistant for Louder than a Riot, NPR's premier hip-hop podcast, unpacking and highlighting the people that create the Culture. When not collaborating there, she is a freelance audio creator, using audio, video and word to explore the intricacies of popular culture, coming of age, and what it means to be Black in America.
Support for CAI is provided by
Support for CAI is provided by