On a summer's day in 2006, inside an apartment not far from Virginia's old death chamber, an 82-year-old man handed over a briefcase to an archivist. The bag held four execution recordings so rare, similar tapes from another state had been released just once before in history.

When executions take place, only a few people are permitted to attend as witnesses. Since prisons forbid even those journalists, lawyers and family members from recording audio or images, virtually no physical evidence from their vantage point exists from any state. But they're not the only ones watching. Prison employees also see what happens in the death chamber – and they sometimes tape it.

The cassettes in the briefcase were recorded by staff, and the donor, R. M. Oliver, had worked in Virginia prisons for years. But how that government audio ended up in his bag — and why he privately donated it to the Library of Virginia — is a mystery. Oliver left his last position with the Department of Corrections in Richmond before any of the executions were taped. His family said he took the story to his grave when he died.

"Dad kept it a secret from us," said his son, Stephen Oliver. "I don't even remember seeing that briefcase."

The tapes from Oliver's bag remained unavailable for 16 years. The library initially restricted them and planned to keep them off limits for decades more. But NPR argued for their public release and obtained the audio in 2022.

An NPR investigation can now reveal the tapes show the prison neglected to record key evidence during what was considered one of Virginia's worst executions, and staff appeared unprepared for some of the jobs they were tasked to do in the death chamber.

Before Virginia abolished capital punishment in 2021, the state executed more people than any other in America. This is the first time audio recorded during any of those executions has ever been published.

Behind the scenes: "We didn't know for sure"

Minutes before he was scheduled to die by the electric chair, Alton Waye used his last words to forgive the workers who would soon have to help kill him.

"I'd like to express that what is about to occur here is a murder," he starts by saying on the tape.

An employee whispers the rest of Waye's statement into the recorder: "And that he forgives the people involved in this murder. And that I don't hate nobody and that I love them."

That worker then checked in with another colleague to see if he had heard the statement correctly. He hadn't.

"I'm trying to get it," the second man responds. "I would like to express that what is about to take place here is a murder. Did anyone else catch the rest of that?"

The prison eventually got Waye's words down right. But the other tapes show uncertainty was common in the death chamber. At the beginning of the narration of Richard Whitley's execution in 1987, the staff seemed confused about how they were supposed to record the event.

"We're not using a blank tape?" one worker asks, before a second wonders out loud if the recorder was turned on.

The prison staff seemed still more unprepared during the electrocution of Richard Boggs. For more than two minutes, staff can be heard on the tape appearing to struggle to connect a call from one of the only people with the power to cancel an execution at the last moment.

"We need to get 306 clear, the governor's office is calling," a worker says.

The situation was urgent.

"Debbie, they are strapping him in the chair!" a second woman exclaims. "Hold on a minute."

If the governor wanted to save Boggs' life, he would need to be connected with someone in the death chamber quickly. Minutes passed, however, and the issue appeared unresolved. A third employee predicted they would have to cut Debbie off in order to connect the governor.

"Let me call Switchboard and see what's going on," one of the workers interjects, before a line appears to go dead.

Boggs was eventually executed. The governor, L. Douglas Wilder, had not called to spare him. But if Wilder had felt differently – and had the staff not been able to connect him in time – Virginia could have come close to carrying out the execution of a pardoned man.

"We didn't know for sure whether you had contact down there with the governor's office," one of the workers reiterates on the tape.

The fourth and final recording revealed a more serious oversight.

Local reporters who watched the execution of Wilbert Lee Evans in 1990 said they witnessed one of the worst in Virginia's history. Three journalists wrote in the Richmond Times-Dispatch that, following the administration of the first jolt of electricity from the chair, Evans started to bleed from his eyes, mouth and nose.

"Blood flowed from under the leather death mask," observed a journalist from the Virginian-Pilot.

A reporter from a third newspaper, the Alexandria Journal, said something similar.

"He started bubbling blood," Geoff Brown observed, "and it ran down his belly and his shirt."

But the tape the prison created during Evans' execution recorded none of those details.

"It is 11:04, the first surge of electricity has been administered," an employee states.

It was right after that first jolt that reporters said the blood started streaming down Evans' chin and soaking his shirt. The voice of the narrator can be heard breaking on tape. But if she was affected by the scene, she didn't clarify the reason. She never mentioned any evidence of blood.

Then, minutes later, just: "The inmate has expired."

"What is the state trying to cover up?"

None of the 27 states that currently allow the death penalty use the chair as their primary method of execution anymore. Most have switched to lethal injection. But mistakes in the death chamber are still common.

In 2022, more than a third of the 20 executions that were attempted across the country were botched. The governor of Tennessee called off an execution after he learned staff had failed to test the chemicals they were planning on using for contamination. Workers in Texas struggled for more than half an hour to place an IV into a disabled man's neck.

Official cover ups after the executions go wrong are also not unusual. Behind closed doors, on July 28, 2022, execution workers in Alabama took more than three hours to set an IV line into Joe James, Jr.'s body. The state said nothing out of the ordinary happened during that time. But a nonprofit, Reprieve, obtained permission from his family to conduct an autopsy afterwards. It revealed multiple puncture wounds, bruises, and evidence that the state may have cut into his skin to find a vein, said Blaire Andres, who leads death penalty projects for Reprieve.

"All of that was hidden from view from the journalists that were supposed to witness the execution," said Andres. "If the state is doing everything correctly, they shouldn't have anything to hide. So it does raise the question, what is the state trying to cover up?"

After NPR requested all remaining execution audio from the agency under the Freedom of Information Act, Corrections confirmed it has at least six additional audio files with 70 minutes of tape recorded on them. But it refused to share the tapes. It also declined an interview request.

In an email, a representative from the agency defended the decision to keep the audio concealed. Because the tapes are private prison records, private health records and contain confidential personnel information, the agency does not have to share them, the representative wrote.

An attorney who teaches at the University of Virginia's law school, Ian Kalish, reviewed the email. He said Corrections seemed to be acting in a manner contrary to the intention of the state's public records law, which was designed to grant people access to government files.

"These types of records are really key to facilitating public oversight and holding public bodies and government actors accountable," Kalish said. "It's very concerning to me that this type of information is being withheld."

As long as Corrections refuses to reveal the rest of the execution audio, Oliver's tapes could be the only existing content from inside Virginia's death chamber that people can hear. Together with the 19 execution tapes from Georgia that an attorney subpoenaed during a court case, the two sets are the only pieces of publicly available audio evidence from the more than 1,500 executions that have taken place across the U.S. during the past 50 years.

Whether Oliver knew how significant the four tapes would be when he gave them away is unclear. But Roger Christman, the archivist who collected the briefcase from Oliver's apartment back in 2006, thinks he may have had an idea.

"He was really happy that he could find a home for these records," Christman remembered. "He thought they were very important." 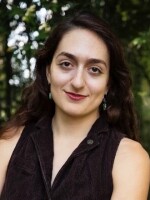 Chiara Eisner
Chiara Eisner is a reporter for NPR's investigations team. Eisner came to NPR from The State in South Carolina, where her investigative reporting on the experiences of former execution workers received McClatchy's President's Award and her coverage of the biomedical horseshoe crab industry led to significant restrictions of the harvest.
Support for CAI is provided by
Support for CAI is provided by