In from the Cold: Martha’s Vineyard to Open Its First Dedicated Homeless Shelter

For the past five winters, three Martha’s Vineyard churches took turns sheltering the homeless on different nights of the week. But those pop-up shelters relied mostly on elder volunteers, and they closed abruptly in March because of COVID-19.

This fall, a committee went looking for a new location. What they found could change the island’s approach to homelessness.

The process wasn’t easy. In late October, with winter imminent, the Vineyard still had no shelter.

The Rev. Chip Seadale, an Episcopal priest, was part of the group looking for a new location. He checked out a possibility in Oak Bluffs: the Portuguese-American Club.

“It's basically a function hall,” he said as he walked the grounds. “I think it's going to serve our purposes well.”

Seadale hoped it would be the right place to open a single-location shelter, run at least partially by paid staff.

“The problem with having this in more than one site for this winter was we probably were not going to be able to recruit so many volunteers,” he said.

The club looked good, but when the committee studied the space more closely, they realized it wasn’t large enough to socially distance 13 homeless guests and two overnight staff.

They were once again up against a very Vineyard problem: real estate.

Hospital CEO Denise Schepici said the trouble finding a location has a lot to do with the stigma of homelessness.

Before the rotating shelter system started five years ago, just about the only place for homeless people to go on cold nights was the hospital emergency room.  Dr. Karen Casper remembers it well.

So the island went from having no shelter, to a system in which the actual beds had to be moved between three different locations each week.

COVID-19 has pushed the community toward a more permanent solution, albeit only for the five coldest months of the year right now.

And still, after months of looking and offering to pay rent near $10,000 a month, no space seemed to be available.

Then, a breakthrough: The Vineyard Trust offered the basement of the Old Whaling Church.

“It’s in a wonderful location,” said Karen Tewhey, director of the homelessness prevention organization Harbor Homes. “It's on the bus line. It's in downtown Edgartown.”

She said the space is about 2,500 square feet — more than enough to meet COVID-19 guidelines.

“I think it's going to be comfortable, safe and a healthy environment for all of the individuals that may get to use it,” she said.

It will be an emergency shelter open to anyone, including people who don’t qualify for temporary housing in hotels because of behavioral history or an encounter with police.

With the new location, the committee is talking about adding hours, so guests can come in from the cold by 5 p.m. instead of 7, stay until 9 a.m., and come inside to warm up for two hours in the middle of the day.

“This is also a turning point for the island, because there's a recognition that shelter is needed,” she said.

The hope is to create a dedicated shelter — and a lasting change in how the Vineyard extends a hand to the unhoused. 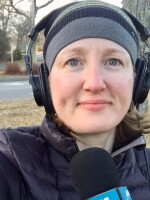