New Survey Finds Seals May Be Less Controversial Than Thought

For conservation biologists, the growing number of gray seals in New England is a success story. For some fishermen and beachgoers, it's another story altogether. Seals can steal fish, damage fishing gear, block beach access, and attract great white sharks. For all these reasons, seals have become a touchy subject in communities across the Cape and Islands - nowhere more so than on Nantucket.

Now, a new survey - the first - digs into the attitudes of voters, tourists, and anglers on Nantucket. Jennifer Jackman of Salem State University says the work revealed more consensus than she expected, and also some parallels to attitudes about another local top predator - coyotes. 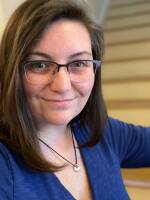 Alecia Orsini
Alecia Orsini is an award winning independent filmmaker and multi-media professional. She joined the team at WCAI in March of 2012 as a part time host. She became the Special Projects Assistant for Development department, where she coordinated events, volunteers and managed member engagement. As the Development Associate she continues to bring more meaningful connections to WCAI's members, fostering donor support of the station. Alecia also continues to fill in as host for Weekend Edition and All Things Considered.
See stories by Alecia Orsini